So today I’ve been sitting at home, just working on some portraits and drawing requests. Enjoying a warm ginger bread hot chocolate. That’s the life. I’m going to start a program type thing for young females. A female empowerment type program! It might take a bit and I still have to do a LOT of planning, but I am in love with this idea and could see something great happening with this! Lately been listening to a band named Lorene Drive. I like them a lot so far, and I mean…the singer…HOT DAMN. 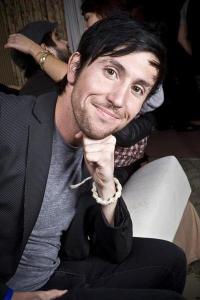 So other than that, nothing has really happened. I’m so happy that ive been sleeping a lot better now! All around I just feel better! I’ll be back with a longer thing tomorrow! Night night world.

I had to share this. I find this so inspiring! Credits of this video go to the models, and the people who run this organization. Thanks to Pro Infermis, They made this video to shed light on this topic and show how beautiful everyone really is. I hope many of you when you watch this, feel inspired and love this as much as I do. All the information is in the description in the original youtube video. Thank you for this short film.

Yep, Basically it. Just been working on a new portrait. I really love doing coloured portraits, I’ve been doing that a lot more often now. I have to get some more supplies soon though! Lately I’ve been just working with my sketch book and coloured pencils. It’s not like I don’t enjoy it, I do! It;s just nice to experiment with other mediums too, you know? I love using water colour, acrylic paint, and I just want to experiment with more things. I actually really want to get into sculpting!

Anybody else into something? What is your favourite thing to use for your art? I would love to know more on this!

Sorry my posts have been pretty short, I’ve been just up to things but I will return with something new soon!

Finally can actually post something new I worked on. I hope you guys like it! It’s a singer, his name is Danny, from the band Hollywood Undead. It took a while and I just need a reason to draw his … END_OF_DOCUMENT_TOKEN_TO_BE_REPLACED

My personal ideal thing that I would love to have is something with no serious commitment right now. A friend that I can still trust, still talk to, but have nothing like jealousy. I don’t want anyone feeling possessive. Someone I can obviously be sexual with, and talk about what we like without feeling awkward. Someone that I can drink with occasionally, or smoke with, listen to good music and cuddle. As long as there are no strings attached, that would be my perfect thing. I obviously want some attraction but I don’t want a relationship. I want to explore, I want to have fun. No one that clingy either. I get very annoyed when I feel smothered. I think a lot of people would agree with that bit.

Any thoughts? Don’t be shy, There is no judging on this blog!

I always wonder why people have the need to belittle and make others feel like shit. What does it really accomplish? You made someones self-esteem way low. Hooray? Are you really supposed to feel good about that? I don’t see how that works really. Are you supposed to feel more powerful after? If anything it just makes you look like an ass. I don’t see how people want to actually hang out with others like that. In my opinion, and my dad said this to me before, those people should actually feel a bit embarrassed to have a friend like that.

Don’t get me wrong, I have said it a lot and I will say it again, I am no angel. I have said some mean stuff, stooped down to someones level to get back at them and all that. No one is perfect. However, I can recognize and admit my mistakes. Sadly not everyone can do this apparently. Some people seem to have no humility. Pride blinds some people. Like I said, I know that no one is perfect. Everyone says things that they are probably not proud of, but when you deliberately put someone down, that doesn’t make you cool. That just makes you look like a dick. (pardon my language) Who really wants to associate with people like this? I mean, you never know if they do the same to you behind your back! What I have also noticed is a lot of these people poke at you at what you have done. It’s like they are trying to mask their own mistakes by pointing other people’s mistakes out.

If you are going through something like this, someone is bothering you and saying things, don’t be scared to stand up for yourself. Let them know that you aren’t going to just sit back and take it. Tell them straight up that you’re too good for this. If you feel like you’re alone going through it, no you are not at all. It’s sad but it’s seriously going on around the world. You aren’t the only one getting picked on. If you need advice and you feel like you have nowhere to turn to, I’m here. I don’t care if it seems like the smallest thing, if it’s bothering you, don’t be scared to talk about it. I’m here for anyone that is going through a hard time. Instead of separating ourselves, lets come together. Maybe with that little bit of change, we can make this a place where we don’t have to be afraid of being ourselves, or making mistakes, or even doing what we like to do.

“I know, I know I’m not right
But I’ve got my whole life
And that’s alright with me”
– Hollywood Undead
New Day

Oh hi there! I know it’s been a while I’m sorry! God, all I’ve been doing is being in my bed. Hmm, well I finished a new portrait, hopefully I can post it up soon! Well, there is nothing new but my realization I had today. My realization is that…I actually LOVE being single. I actually am enjoying every thought about being single.

Well, you guys have probably seen my last post. It was pretty sad and pathetic sounding. But I gave it some thought today, and firstly, what that last blog is about, is EXACTLY one of the reasons why I am fully content on being single. My ex is a perfect example of what I don’t like. He was possessive, he was jealous, he was a hypocrite, he was a liar, a backstabber, and much more that I shouldn’t say. Honestly this space away from anyone romantically has shown me that I really love my space. I can think clearly and make decisions on my own without someone else trying to influence me. I don’t have someone clingy, always having the need to check up on me or be by my damn side 24/7.  I have control of my thoughts, I don’t need someone to reassure me that I’m great, or I’m good-looking, cuz you know what? I am a 20-year-old woman (this is so cliché but I’m gonna say it anyway!) that don’t need no man!

But seriously, another reason why I love it is because I can do WHO I want…haha. I will be open about this. Sex feels good. I like it, and there is also nothing wrong with a young woman like myself to embrace our liking for it. I’m young still. I can still get away with going out, meeting people, hooking up and doing what I want. Would I be able to do that in a closed relationship? Nope. I’ll take advantage right now and just explore. There is no need to settle down right now. No way am I doing that now.

Another reason is I can actually focus on myself. I can focus on my own thing, what i want for my own future, and learn to really be independent. That is one of the most important points to me. This means from little things to more serious things. From how I can do my hair, to things like what i want to do for my life career, where I want to live. focus on me in general. Now that is what I need. Actually, this right here, is what EVERYONE needs.

What are your thoughts about relationships and the single life? I want to hear more opinions!

First of all, this band has to be one of the best bands that are still doing music right. That being said, this song is somewhat hard for me to listen to. It’s that fact that there is memories that connect to this song that are still fresh in my mind.

I mentioned a little bit about this in my changes come post. I was in an on and off thing for 2 years with this guy I fell head over heels for. At one point we stopped talking, due to the fact that he was pissed at me for trying to move on to someone else. We didn’t talk for about two weeks I believe. I was doing fine honestly without him. He wanted to talk one day, I wasn’t going to but then I bumped into him and I was still pretty bitter about things. Before I could say anything, he gave me a huge hug. I was lost and I didn’t know what to say. I was still kind of angry but at the same time happy. He told me that he was sorry, and how he was just very jealous. (He told me that same thing I would guess more than 500 times during the whole two years) I didn’t know what to really say. He was saying how badly he wanted to kiss me but he couldn’t because of the fact that I was with someone else. This is where this song comes in. The last part of these lyrics end with Maynard singing “remember I’ll always love you, as I claw your fucking throat away, It will end no other way”. He said those exact lyrics to me. That should show how fucked up we were. I just remember sitting there, kind of dumbfounded. I really had nothing to say. Somehow it actually made me feel guilty. He was always so good at getting me to feel that way. I remember after that, he looked at me and then it happened. Planted that kiss he was waiting for. I can’t lie and say I didn’t like it at that time. I knew it was wrong, I was with someone who gave me trust. I knew they wouldn’t do that to me. I let it happen anyway, because I just couldn’t say no to him.

That’s what this song really makes me think of. I know I sound all sappy about it again, but I’m over that now. A new beginning. He is out of my life for a reason. Multiple reasons. I’m still getting over him, it’s been since September that it was officially done. Even if at that time I obviously didn’t want to let go, now I see why it needed to end. It was something that shouldn’t have happened. This whole thing I know take as a lesson I learned. I will apply this lesson to my future and become stronger from it. These mildly spiced veggie burgers are out of this world. They are full of flavor and great for freezing- especially delicious with avocado on top! I like to serve these with hummus for spreading. These bad boys are sure to make even the biggest carnivores go nuts!

HAHA! I love this too much.